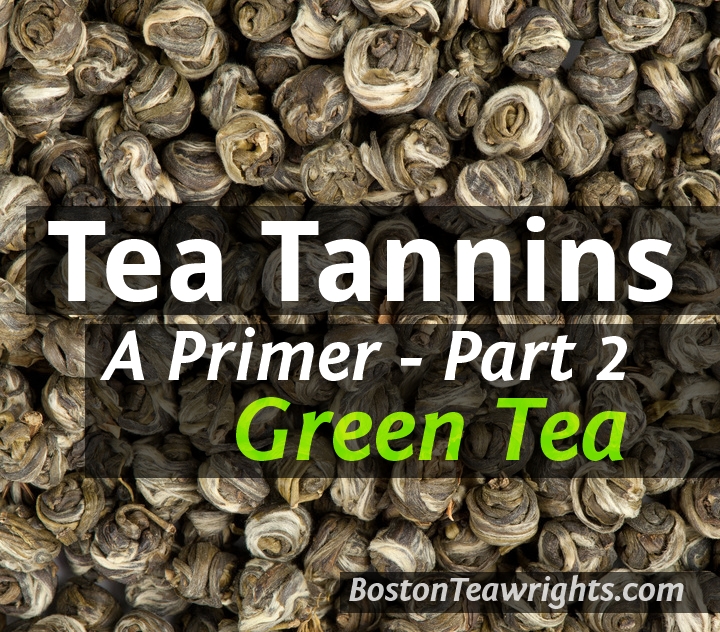 A while back I began this series on Tea Tannins. Feel free to click that link to catch up, or after reading this article using one of the links below. The article was inspired by a question I had. You see, when over steeping a tea, it becomes too astringent to enjoy. Tannins cause this astringency, and so I wondered if they were really necessary for the enjoyment of tea.

After a bunch of research I found the answer: Yes. Furthermore I began writing an article about Tea Tannins. There was so much information that it had to be broken into several articles. I’m finally getting around to writing part two.

So part 2 of my articles on Tea Tannins. This time we’re exploring the content, relationship & affects on green tea.

A quick recap of what we covered previously is in order. The word “Tannin” is the common term used to describe a compound class known as plant polyphenols. These are a heavy class of molecule that loves binding to things like proteins and certain metals (why some folks with iron deficiencies are told not to drink tea within an hour before & after meals).

Tea tannins are a much lighter version of these polyphenols. While the larger class isn’t usually human friendly (think tannic acids), tea tannins are cool with us. This is evidenced by the thousand plus years of human consumption.

Interestingly, tannins are part of the tea plant’s protective systems, as well as its nutritive systems. It plays a role in fending off insects, animals, occasional fungi & whatnot on behalf of the plant. It’s also activated during decomposition since it exists within the leave’s cell walls. So when the leaves naturally fall on the ground and begin decomposing, the tannins are released into the soil.

And now, on to tannins in green tea!

OK, I’m going to start spouting fancy names of compounds and biochemical classes. I’ll try to make it manageable and understandable, at least on the parts we need to understand. As mentioned earlier, tannin is the common name for plant polyphenols. A type of polyphenols that occur in tea are Flavonoids (note the “o”). Within flavonoids we have the main tannin component of green tea, a type of flavanol (or flavan-3-ol) called catechins. 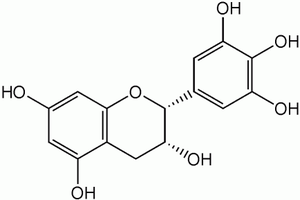 OK, I’ve setup the basic hierarchy of classes. So we will focus on Flavanols, or more commonly called Catechins. These are one of the main components of tea, let alone green tea. Different studies have found that they can make up anywhere from 20% to 40% of tea’s dry weight. Wow. The amount varies because many things influence this content, from: cultivar, environment, sunlight, to processing techniques.

There are some other polyphenols in tea, which usually aren’t mentioned in the literature. These other compounds aren’t as prevalent as the catechins. They include flavonols (not to be confused with flavanols…) & their glycosides (sugar compounds), and several depsides.

Tannins contribute two attributes to the flavor of green tea. The most obvious and apparent flavor attribute is astringency. We notice this the most when over steeping a tea for too long or at too high a temperature. In moderation, though, it contributes brightness to the overall flavor of tea.

How it does this is very interesting. Tannin’s astringency is technically not a flavor, but a mouth feel. You see, tea tannins react with your saliva causing it to thin. The removal of “salivary mucoproteins” increases the friction between surfaces in your mouth, which results in a feeling of dryness & roughness.

The second attribute tannins contribute to flavor actually derives from one particular polyphenols. One of the depsides I mentioned in the previous section is called Theogallin. This compound is fairly unique to tea. Although it appears in a much smaller quantity, it contributes to an umami flavor.

Extraction of Tannins from Green Tea 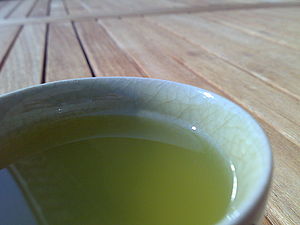 We’ve now covered all sorts of fun facts about the content of green tea and how flavor is affected, so how about extraction methods. More simply, how to steep? Instructions for steeping times vary for all sorts of green tea. The timing is determined by many factors including: the cut of the leaf (fannings versus whole leaf), the cultivar, growing conditions, how the leaf was processed, even how old the leaf is. A good rule is to use the recommended time from the tea seller. They should learn the steeping times from the estates and manufacturers of their tea. Basically, the person closest to the creation of that tea generally knows best.

One thing is pretty constant, and that’s the temperature. Studies show that 80 Celsius is the sweet spot. It’s hot enough to extract the tannins, but not so hot it changes them (check out a previous post about the ideal temperature to steep green tea). One study shows that if you steep green tea in 80 Celsius water for 20 minutes, you will extract 100% of the tannins. This was the optimal water temperature & time for extraction. Of course, this was for the purposes of developing dietary supplements, and is more tannin that you’ll want in a cup of tea. The main point was that of a variety of temperatures, 80 was the ideal.

That 20 minute time frame reveals something else. There are enough tannins in green tea to create several steepings. Each consecutive steeping from the same leaves will likely need longer times. We can probably estimate, however, that a good batch of green tea stands up to several (4 maybe 5) steepings. Basically, it has 20 minutes worth of tannins.

And there you have it, a compilation of what research & study has revealed about tannins in green tea. In the next installment, we’ll look at tannins in black tea. Until then, enjoy your Teawright’s Journey!