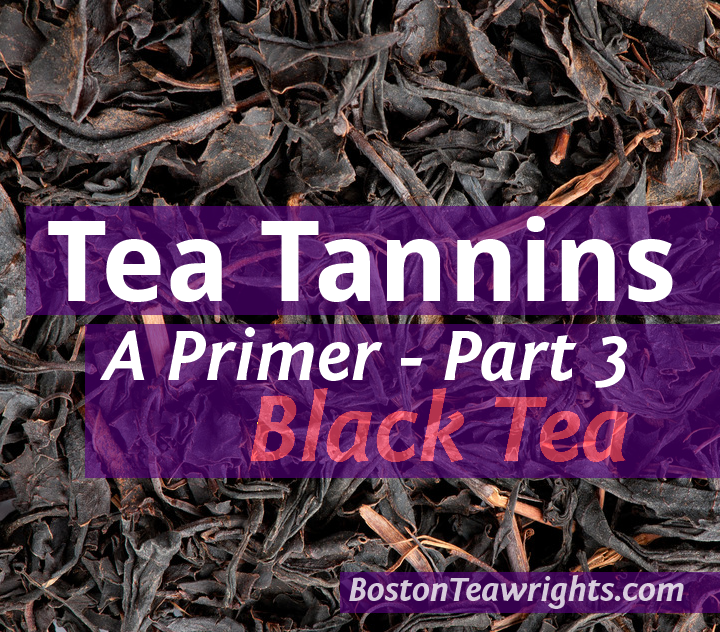 Tannins, the common name for a group of compounds that food scientists prefer to give a more complicated name. They like to call them plant polyphenols since they’re molecular compounds composed of multiple phenolic groups. If I just lost you, it’s ok, I’ve been there too. I’ll try not to be that fancy in this post.

So, in the previous post on tea tannins, we discussed tannins and their relationship with green tea. If you recall, green tea has many different types of these compounds. For the most part, those tannins are a particular type known as catechins.

You’ll also remember that temperature can affect and change these tannins. This is important, because it means they’re not permanent ingredients, but can and will change over time or through manipulation. I bring this up, because that’s precisely what happens with tannins when it comes to black tea.

The tannins you find in green tea are not quite the same as what you’ll find in black tea. So let’s continue on our journey together. Let’s explore tannins and black tea. 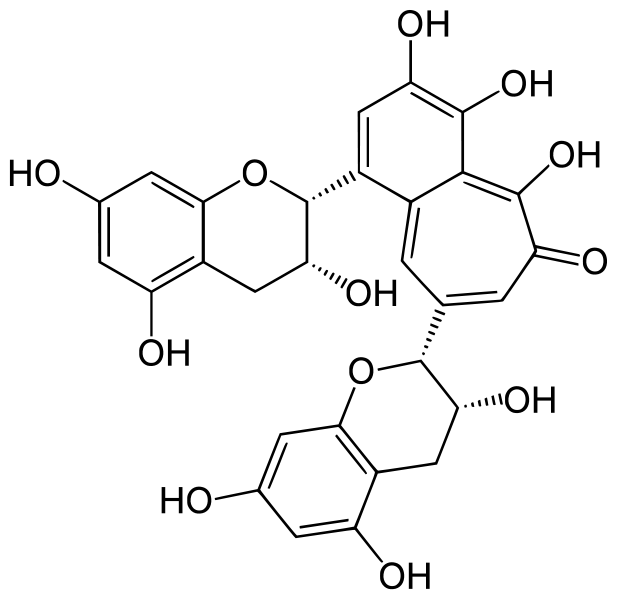 Chemical structure of Theaflavin (via Wikipedia)

As mentioned in the teaser, black tea contains a different collection of tannins than what’s found in green tea. This is because time & processing (tea making) changes the tea’s tannins into different forms. You’ll still find trace amounts of traditional green tea tannins, but now they’re dominated by a different club.

Theaflavins are an anti-oxidant plant polyphenol. There are three main types of theaflavin found in black tea. These guys are: theaflavin (TF-1), theaflavin-3-gallate (TF-2), and theaflavin-3,3-digallate (TF-3). Guess I got a little overly academic here again, my apologies.

Anyway, on average you’ll have about 233.12mg of these flavonoids in your 200ml cup of black tea. This number was derived by the USDA. I have some qualms with it, however. Having studied both tea and statistics, I can tell you that there are far too many variables that go into black tea production & the types of black teas out there. This means that even if the average is 233-odd mg, the range could be quite large. That means one cup of black tea might barely have 50mg, while another might have nearly 500mg. Statistics; they show what you want them to show.

These tannins are critical to black tea. This is because they’re the primary flavor component, and they contribute to the reddish color of the tea’s liquor (the water folks, no alcohol involved). 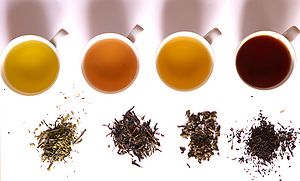 Tea of different fermentations (via Wikipedia)

So here’s the fun part. How do you start with a bunch of green tea catechins like epigallocatechin-gallate (our favorite: EGCG), and end up with theaflavin? It’s all in the technique.

One of the big differences in how black tea is made vs. green tea is that black tea requires withering the fresh leaves. The wither is critical, since during this step a number of biochemical and physiological changes occur in the tea leaves. The cell walls become more permeable and open up, releasing the catechins. These are now free to react with other compounds that occur in tea leaves, mainly enzymes.

You see, while there’s another critical step in black tea processing (the “fermenting” stage), that step actually occurs during the entire black tea making process. And if you’ve read through our site, you’ll know that “fermentation” is the wrong word for what’s happening, because no yeasts are involved (i.e. No fermentation is happening). Instead, what’s occurring is something called enzymatic oxidation. This is similar to what happens in bruised apples and bananas, making them brown. It’s not simply an oxidation; it’s an oxidation of the leaf as helped out by enzymes. 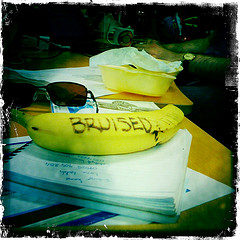 The enzymes are the answer as to why black tea’s tannins are different. There are 2 main enzymes involved here. They are the: polyphenol oxidase (PPO), and peroxidase (PO) enzymes. During the natural cell breakdown that occurs while the leaves wither, these enzymes convert catechins into thearubigins and theaflavins. This is done in the presence of oxygen. Specifically, though, these enzymes like to convert epicatechin (EC), epigallocatechin (EGC) and epigallocatechin-gallate (EGCG) into black tea tannins.

These enzymes are also somewhat sensitive to temperature. The warmer it gets, the less active PPO becomes, particularly above 35C / 95F. Of course, heating them at a higher temperature (such as when steaming or wok-firing) will destroy these enzymes. This prevents them from oxidizing tannins, and is the main reason why green tea remains green.

It’s not just heat that affects these enzymes, but hydration too. The activity of PPO in particular was shown to reduce when too much moisture loss occurs. This is something common to white tea processing. White tea undergoes a special withering and nothing else. This causes the tea leaves to wither at a minimal moisture level so that the tannin content is different.

As mentioned earlier, theaflavins & general thearubigins are the biggest contributor to the flavor & color of black tea. They add to the astringency, as tannins generally do, but there’s another trick up their sleeve. Theaflavins in particular contain a unique chemical aromatic ring called tropolone. This combines with the caffeine in black tea to form a “cream”, which helps control the bitterness & astringency of the same tea. I have a theory that this is the key to why you can oversteep a black tea and make it bitter, but multiple steepings won’t taste any more bitter than the first steeping. But this will be explored in a later blog post.

So these are my research findings on tannins in black tea. Hopefully you should walk away being wiser on the subject. And until next time, enjoy your teawright’s journey.

Oh, and just for some fun…here’s a great video.